Excerpt and images from a terrific enterprise IT blogger JoseLuisGomez.com Nutanix Xpress, the new HCI product line for SMB

Nutanix Xpress is a pre-assembled private cloud stack, available only through the VAR channel, that bundles storage, compute and a hypervisor along with management software. Prebuilt Cloud Connect integrations allow for data backup to public cloud services, including AWS and Microsoft Azure.

For small and medium-sized businesses, purchasing, installing, and managing IT infrastructure poses significant challenges. Existing solutions may be too complicated and require specialized skills that overstretch IT budgets. The Nutanix Xpress family addresses the IT needs of smaller organizations through ease of management, lower TCO, and simple, risk-free deployment, with world-class support for the entire infrastructure stack just a phone call or email away.

Nutanix is targeting the “Global 200,000” small and medium sized businesses, defined as follows:

Nutanix Xpress is a complete hyperconverged offering that natively integrates server,
storage and virtualization in a single, space-saving platform and radically simplifies the
infrastructure stack.

Nutanix Xpress makes on-premises infrastructure as simple to consume as public cloud
services. The infrastructure can be installed, configured, and ready to run virtualized
applications in 60 minutes or less.

• Eliminate the need for specialized skills. Xpress greatly simplifies the entire IT environment, including storage and virtualization
• Reduce purchasing costs. Total cost of ownership is up to 60% less than comparable traditional infrastructure.
• Consolidate all applications. Everything runs on a single system—with no specialized or dedicated hardware
• Streamline management. With consumer-grade design, Nutanix Prism makes it easy to keep infrastructure up and running

What’s the difference between Xpress and Xtreme?

As expected, to achieve a reduction in cost, Nutanix had to cut the costs somewhere. The easy way is reduce hardware resources, but it’s not enough to be cost-attractive. Many vendors achieve to be competitive because they release different editions of their software with different features on each one. The picture below shows Xpress vs. Extreme (Enterprise) product lines: 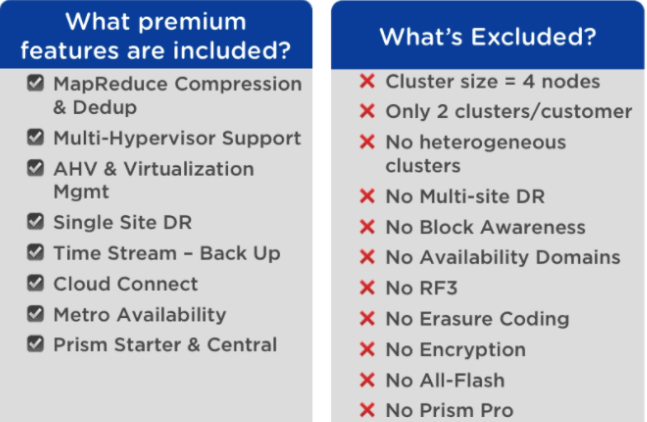 There are a variety of SX-1065 configurations available. Here are 3 basic models from Small to Large.

The field of all-in-on hyper-converged platforms has certainly grown over the past 24 months. While some smaller startups (Nimboxx?) could not gain enough traction early, others have been delivering robust, time-tested gear for several years. Here’s a run-down of a few of the top names.

Scale Computing enters the best hyper converged solutions category by differentiating its HC3 and HC3x hyperconverged platforms with ease of use and simplicity. The company chose to standardize on KVM as a single hypervisor and built its own management layer, creating high functionality without the need for a virtual storage appliance, coupled with object-based storage with direct access to the hypervisor. Reliance on KVM also eliminates licensing fees for commercial hypervisors, making the product attractive to smaller organizations. Scale Computing recently added integrated disaster recovery capabilities into its HC3 platform.

Pivot3 is hardly a newbie, founded in 2002 with a focus on converging virtual servers, storage and networks. The company says it launched its best hyper converged appliance in 2008, when a casino asked for a secure and cost-effective way to store video streams (at the time, Pivot3 called it “serverless computing.”).”

Using Scalar Erasure Coding, Pivot3 developed vSTAC OS, which the company says “allows any program running on one appliance within the cluster to access resources across all the appliances in the cluster.” Pivot3 focuses on the video surveillance and virtual desktop markets and counts more than 1,300 customers worldwide. Recently, Pivot3 acquired NexGen Storage to flush out it’s all-flash offerings.

Hyperconvergence pioneer Nutanix launched its first product in 2011 and initially focused on a message of “ban the SAN.” Today, the company’s Virtual Computing Platform provides integrated compute and storage through servers running a standard hypervisor and the Nutanix OS. According to Gartner’s report on integrated systems, Nutanix’s technology is unique in that “the storage and compute elements are natively converged to create a much tighter level of integration”; a node-based approach that “enables theoretically limitless additions of new compute or storage bandwidth in very small increments.”

Gridstore offers best hyper converged solution purpose-built for Microsoft Hyper-V. The startup’s hyperconverged appliances come in both all-flash and hybrid versions. Unlike other scale-out storage products, which use standard storage protocols such as SMB or iSCSI, Gridstore places much of the work of managing the scale-out cluster into the client as a virtual controller. Gridstore may have an advantage in the market if it can capitalize on its position as the first Hyper-V optimized storage system.

Dell’s first Nutanix based hyper converged solution is the XC730xd, which is based on Dell’s PowerEdge R730xd rack-mount server platform. The XC730xd, based on Intel Xeon E5 2600 v3 processors, fits up to 32 TB of storage capacity in a 2U enclosure, or about 60 percent more capacity than the previous model based on the PowerEdge R720xd servers. The second model, the XC630, is based on Dell’s 1U PowerEdge R630 platform, and can be configured with up to 9.6 TB of storage capacity.

The SteelFusion 4.0 from San Francisco-based Riverbed Technology targets the simplification of branch-office IT support by virtualizing and consolidating 100 percent of data and servers from remote sites into data centers to centralize data security and IT management. SteelFusion does this with a series of hyper-converged appliances that are deployed in a remote office to run applications over a WAN using data stored in a central data center.

New with SteelFusion is FusionSync, which provides seamless branch continuity by ensuring all branch data is accessible across private and hybrid cloud environments. This, according to Riverbed, gives remote offices the ability to withstand and recover from data center failures with zero downtime.

Another pioneer in the hyperconvergence space, SimpliVity came out of stealth mode in 2012. The startup’s OmniCube platform combines compute, hypervisor, storage services and network switching on x86 server hardware with centralized management. OmniCube goes further than other integrated systems by incorporating features such as built-in VM backup, in-line data deduplication, compression and optimization at the source, according to Gartner.

Unlike traditional networked storage systems, even those that also integrate flash and spinning disks, there are no LUNs, volumes or tiers, which Tintri says present barriers to virtualization because they have no intrinsic meaning at the VM level. Instead, each I/O request maps to the particular virtual disk on which it occurs, the system accesses the vCenter Server API to monitor and control I/O performance at virtual disk level, and you manage in terms of virtual disks and VMs.

Nutanix vs. Tintri (pricing only comparison)

This is a brief excerpt from the original article at ZDNet.

“The race, therefore, is on to virtualise storage to make it a better fit for the software-defined datacentre as well as more affordable and easier to manage. All the big names are busy doing something — including virtualisation leader VMware, which recently released its own Virtual SAN technology (VSAN) built into the kernel of its ESX hypervisor. But there are other solutions, and for this feature we opted to examine two quite different approaches to the problem: one from Nutanix, the other from Tintri.”

For a great article highlighting both solutions, check out Nutanix vs. Tintri at ZDNet.

Nutanix, a leading provider of hyper-efficient, massively scalable and elegantly simple datacenter infrastructure solutions, today announced two new platforms that meet the cost, performance and scale requirements to run nearly any enterprise application. Nutanix’s expanded portfolio of Virtual Computing Platforms enables IT teams to tailor and seamlessly grow their compute and storage environment to fit their individual requirements, whether for an enterprise branch office with limited on-site IT resources or core datacenters tasked with supporting an increasingly diverse and demanding set of workloads.

Converged Infrastructure for the Mid-Market – the NX-1000 Series

Features and benefits include:

For a limited time, Nutanix is offering a pricing promotion on the NX-1000 series platform. Contact your local Nutanix sales representative or authorized partner for more details.

Although many converged infrastructure solutions enable a simpler, building block-based approach to the enterprise datacenter, they often lack the ability to ideally match infrastructure capabilities with the demands of specific enterprise applications or services.

The Nutanix NX-6000 Virtual Computing Platform is the first converged datacenter platform to independently scale storage resources in a single converged infrastructure. Existing buyers of converged infrastructure have typically been forced to deploy products that only offer fixed, vendor-selected ratios of storage capacity and compute performance. Because most enterprises need to run multiple applications within the same environment, each with their own unique resource demands, IT is now in need of infrastructure that can be uniquely tailored to each environment. The Nutanix NX-6000 platform makes it simple and affordable for enterprises to design and scale their datacenters one appliance at a time with the ability to add just the right amount of storage and compute resources for any workload.

Features and benefits include: